The controversial pop star has received the LennonOno Grant For Peace award from Yoko Ono in recognition to her commitment to campaigning for gay, lesbian and transgender rights 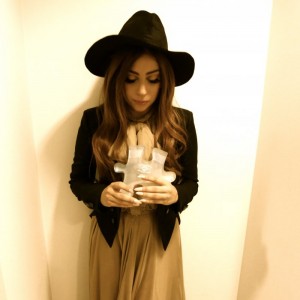 On Twitter, Gaga wrote: “Thank you @yokoono now i can do more, because of you. Today was the happiest day i’ve ever had. Here’s me with my LennonOno Peace Prize. Yoko says, it’s a piece of the sky”. (Photo: Twitter @ladygaga)

Every Beatle fan knows that 9 October marks the birthdays of both John Lennon and his son Sean. And, as a way to make this day even more memorable, Yoko Ono established a biennial peace grant to honour activists that have developed relevant works around the world.

“Lady Gaga is one of the biggest living artists of our time”, declared peace activist Ono when explaining the reasons for choosing the American star.

“She is not only an artist, she is also an activist, using her Art to bring better communication to the world. She is being acknowledged for her activism – and how her album ‘Born This Way’ has widely changed the mental map of the world. It has made us deal with the future world, which happens to be here already”.

The Grammy-winning singer accepted the award in person, and decided to make a donation to the Elton John AIDS Foundation to support their work combating HIV among disadvantaged youth in the US.

“I’m supremely honoured to accept this grant and award today on behalf of youth empowerment around the world”, said Gaga during the ceremony award in Reykjavic, Iceland. “I will be donating this grant to the Elton John Aids Foundation and I will be working closely with them to ensure that the money goes specifically to those orphans and disadvantaged youth in America born with HIV or Aids”.

Gaga took the opportunity to send a message to the world, asking everyone to “Breathe Compassion”.

“We share the same dreams of peace and the same planet. We share the same potential to succeed. So my gift to you is this message. John and Yoko taught me long ago to keep it simple so everyone can understand, so world, breathe compassion”, said Gaga. She also recalled spending some of her childhood just a few blocks from Lennon and Ono in New York and said she found inspiration from the famous family.

While in London for the launch of her new fragrance ‘The Fame’, Lady Gaga paid a surprise visit to Wikileaks founder, Julian Assange, who is holed up at the Ecuadorian embassy in London, trying to avoid extradition for facing rape and sexual assault allegations in Sweden.

The 26-year-old star has been praised for visiting Assange, and for making a statement in support of freedom of speech. If ends up in Sweden to face trial Assange fears onward extradition to America for publishing confidential and sensitive State documents on his Wikileaks website.

Yoko Ono awarded also awarded the prize to the members of Russian feminist punk band ‘Pussy Riot’ at a separate event in New York City. Nadezhda Tolokonnikova, Maria Alyokhina and Yekaterina Samutsevich have been imprisoned over an anti-Kremlin protest.

According to SKY News, Tolokonnikova’s husband accepted the grant on behalf of the three women, who were handed two-year jail sentences for staging a “punk prayer” in Moscow’s main cathedral. Samutsevich’s jail term for hooliganism and offending religious believers has now been suspended following an appeal.

This year’s winners of the prize also included peace activist Rachel Corrie, killed on the Gaza strip in 2003, ‘Confessions of an Economic Hit Man’ author John Perkins and the late journalist, Christopher Hitchens.