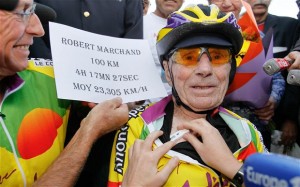 Robert Marchand set the 100km speed record for the over-100 age group (Photo: The Telegraph)

There is no age limit to exercise, and this is not news to anyone. But, apparently, now there is no age limit to break records as well, since French centenarian Robert Marchand cycled 100 km (62 miles) in 4 hours 17 minutes at the outdoor Tete-d’Or Velodrome track in Lyon to make his way into the records book as the fastest 100-year-old ever to cover the route.

The former fireman and boxing enthusiast, who turns 101 on November 26, said to have walked thousands of kilometres throughout his life. For this challenge in particular he has trained every day for months in hopes of crossing the finish line in less than five hours.

Earlier this year, he even broke world speed record for his age group.

Marchand’s longevity and vitality are so surprising that a group of scientists at the Inserm public research institute, in Switzerland, have invited him to take part in a research project. Every three months he undergoes tests to help studies on the science of long life. He was quick to reveal some of them:

“They told me I had the constitution of a 55-year-old man, they think it’s genetic,” he said, laughing. “I have never deprived myself of anything: not wine, not food, not women, but always with moderation.”

And this Parisian athlete is not near his retirement, as he is doing everything possible to keep himself in the game for much longer: “For the last five years I have decided not to go for rides of more than 100km. There is no point going overboard. I want to keep cycling for some time yet,” revealed.

Before the race, the Telegraph asked if he planned to get any performance-enhancing help for his race, and Marchand was emphatic: “The only doping for me is water with a spoonful of honey that I put in my canteen – and that’s it.”