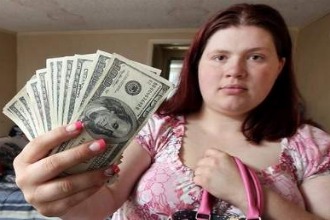 Autumn MIller, whose savings were returned by a kind stranger. Photo Credit: The Cincinatti Enquirer/Patrick Reddy

Brandon Palmer's act of kindness, honesty and decency shows how even what appears to be a small matter - returning a purse - can have life-changing effects for good. Brandon not only handed Autumn back her money, he also handed back her and her childrens' hopes and future.

An act of honesty and kindness has saved a single mother of two’s hopes for a fresh start in life.

Autumn Miller had just moved from Indiana to Florence, Kentucky, to start over. She had a new job and was out hunting for a car and an apartment. The cash to pay for those essentials – $4,000 – was in her handbag.

But after the busy mother of two made a quick stop at a local Best Buy store with her two children, she did the unthinkable; she left her purse in the shopping cart when she left. Realizing her mistake almost immediately she dashed back into the store, but the purse – containing every penny Autumn had to her name – was already gone.

“We were really terrified, it had everything in it,” Miller told the Cincinnati Enquirer.

The purse also contained her birth certificate, her daughters’ birth certificates and their Social Security cards. Autumn, who had been living in a motel room while she house-hunted, was devastated.

“I was mad at myself, I was crying,” she said. “It had the money in it to get me my own car and get us a house so we can get out of the motel …“I just prayed to God that somebody would be nice and turn my purse in.”

Autumn filed a report with the police, and began the task of trying to work out what to do next. A week later, while trying to organise replacements for her lost documents, Autumn got the call she had prayed for. Not only had her purse be handed in, amazingly, all the cash was still inside.

The Cincinnati Enquirer reported that when Autumn picked up the purse, she discovered her Good Samaritan, Brandon Palmer, had found the bag at Best Buy then tried to find Miller at her home but could not. He then took the purse to the police.

“Whether it’s cash or whether it’s identity there are those people who would prey on that in a heartbeat as opposed to doing the right thing,” he said. “That’s what makes this a great story as opposed to a tragic story.”

Autumn called Brandon to thank him and offered a reward for returning the purse. But he declined.

“I’m so thankful for him, it’s helping me out a lot,” Autumn said.