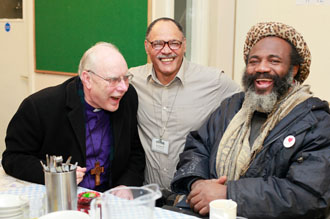 Rudi Richardson (centre). One small act of kindness changed his life - and the life of hundreds of others - forever

Rudi's story is overwhelming proof that one person - one kind act - CAN change the world. A cup of tea from a stranger helped a lost man find himself and, subsequently, help hundreds of others find hope, help and happiness.

Rudi Richardson is an unlikely hero.

Born in a women’s prison in Germany in 1955, where his mother had been convicted of prostitution, he was adopted by an African American couple who changed his name, and took him to live in America.

America did not turn out to be the land of opportunity for Rudi, who ended up spending 33 years drifting in and out of heroin addiction, prison and living on the streets both in the U.S and, later, in England.

“From early on, my life was an accumulation of rejection, abandonment and fear,” he says.

But, one tiny act of kindness changed Rudi’s life forever; and, as a consequence, the lives of hundreds more.

The turning point came when Rudi was 50 years old, and once again found himself under arrest having been caught stealing CDs. Sick and sweating as he went into heroin withdrawal in police cells, it was a police officer who turned his life around with the smallest of kind gestures.

He offered Rudi a cup of tea.

“It just touched my heart. He just didn’t know he gave me my dignity back. He let me know I was a human being, no matter who I was,” remembers Rudi.

After his release, Rudi decided to turn his life around and do something meaningful to help others in the same situation. In 2007, Rudi founded Streetlytes to help others find a way out just like he did.

“Our mission is to help people who stand in the shoes I stood,” Rudi says.

The addicts, the homeless, the broken; all now have a place in one of the four Streetlytes drop-in centres in London’s Kensington and Chelsea area. There, they not only find food and warmth, but can also find someone to talk to.

Streetlytes is run by volunteers, most of whom have also been homeless addicts themselves. The project helps feed over 650 homeless people every month, and also helps set up workshops to schools and the local community to share experiences.

For Rudi, that’s what make this project stands out.

“The essence of Streetlytes is that we reach out to other homeless people and say ‘we’ve been there, we can help, you CAN make it.”