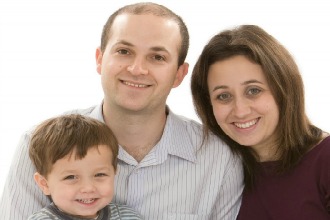 By choosing to create hope from tragedy, Dan Blake has shown that even in the worst of times, light can shine through. His fundraising efforts might be the difference between finding a cure for cancer, or not finding a cure. He has given his wife's death meaning, and perhaps made the step that leads to a cure for mankind's biggest killer.

EIGHT thousand people were selected to carry the Olympic flame as it crossed the UK.

Among the many athletes and celebrities chosen as torchbearers, there were also ordinary people, each of them nominated for doing something meaningful or special.

People like Dan Blake, a widower and father-of-one, who was been selected for his bravery in the face of a family tragedy.

Faced with a daunting task of bringing up their 4-year-old son, Joshua, Dan pushed himself to the limit in a mission to fund Pancreatic Cancer UK.

“I guess I just have had to find the strength from within. Knowing that Nicki would want me to be strong for Joshua and give him the best possible start in life. That’s what motivates me,” says Dan.

Dan gave up his career in the City and set up a charity called Nicki’s Smile. According to him, the decision was not a difficult one.

“It was a very easy decision. I needed to be there for my son – he is the most important person in my life and if I still worked in The City then I would have hardly seen him during the week. That’s not acceptable and our bond has become so close since Nicki passed away.”

Dan says he strongly believes that trying to help others beat pancreatic cancer, he can ensure his wife did not die in vain.

“The survival statistics for pancreatic cancer haven’t improved for a generation. If I can make a difference, then that’s something to be proud of.”

Since its launch in February last year, the charity has raised £270,000.

On July 23, Dan will walk about 300 metres through Croydon, carrying his torch.

Dan was nominated as a torchbearer by his mother Cynthia, who told the selectionn team:

“I feel that if he were lucky enough to be chosen to bear the torch it would be an amazing symbol of hope for him and would also show that he and Joshua, are carrying her [Nicki’s] light & legacy forward.”

For Dan, it is a once in a lifetime opportunity.

“It means the world to me to be a torchbearer. The sole reason I have been chosen is because of Nicki’s passing and how I am treasuring her memory through my charitable efforts. This is the ideal opportunity to pay tribute to Nicki in the most incredible way – carrying a flame in her loving memory that will be remembered in my family and future generations for eternity.”

“My son Joshua will be there (4 years old) and I hope he can pass the Olympic Torch down through the generations and explain the significance behind it. The Olympic Torch experience will be with me for the rest of my life. I will be carrying Nicki with me on that day.”