A tall tale of kindness 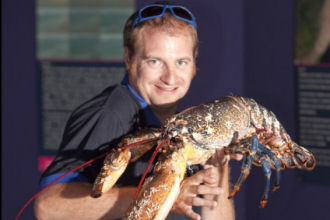 The giant lobster saved by the kindness of two divers
(Photo: Portsmouth News)

Tall tales are nearly always based on actual events that have been exaggerated. When it comes to fish stories, one can always expect to be fooled. We all know that fishermen brag about the “Big One that got away?” This time, in Portsmouth, the catch did get away… from the pot.

The kindness of friends, Mark Reed and Mark Corp, saved the life of “the biggest lobster ever seen”. The pair of commercial divers paid £100 to rescue the crustacean – already in ice – at a fishmonger’s stall.

They told the BBC it would have been “criminal” to see him go into the pot.

Marky Mark, as the fortunate lobster has been nicknamed, not only got away but was also given a new home at Portsmouth’s Blue Reef Aquarium, where he is on display.

Robbie Robinson, who works at the aquarium told The Times: “They said they didn’t want it to end up being eaten and asked if we could give it a new home. It’s definitely the largest lobster I’ve ever seen, and in amazing condition.”

The largest specimen on record weighed in at 9.3kg and was caught in 1931 in Fowey, Cornwall, it according to the National Lobster Hatchery in Cornwall.

Mr. Robinson explained it is difficult to accurately age a lobster, but this lucky one must be at least 50 years old.

“We are just pleased that we were able to take him somewhere he can live and the public can go enjoy him,” said the crustacean’s heroes.