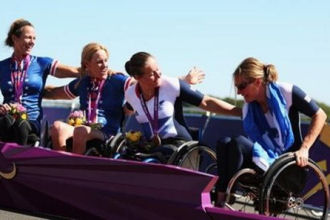 As we say goodbye to the Olympics, Paralympics and a summer of sport like no other, many tales have arisen of kindness, courage and triumph over adversity. One such story is a bittersweet tale, that will in the some respects warm your heart and show us that winning isn’t always everything.

This is the story of Karen Darke, hand cycling road racer at the Paralympics. Darke a former gold medallist at the Beijing Paralympics was on form to take her second Team GB medal of London 2012, due to achieving the silver in the time trials, when she found herself neck and neck with her good friend and team mate Rachel Morris.

What Karen did next was an example of pure selflessness and one that would ultimately cost her the bronze medal, as fifty metres from the finish-line she took Rachel by the hand and they completed the race together in a photo finish.

Rachel who had previously battled for months with injuries, after being hit by a car during a road race went on to take the bronze – proudly she told Yahoo news that “Winning a bronze was better than gold!”

Darke who had helped her friend train during that particularly testing time, jubilantly said that “she had received a medal the other day, so they both had something to celebrate” and that “Karen deserved it more.”

Undeniably for Karen this is a tale of sacrifice, but also one of great sportsmanship and real friendship. Indeed she may not have won a medal, but through her kind actions she is a true champion and that is better than winning any medal.