The Paralympic Games in London came to end leaving a legacy of memories and life stories that depict the real meaning of kindness. 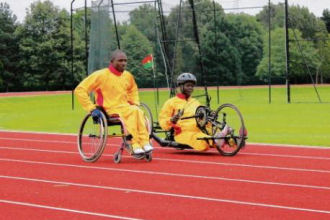 Take the trajectory of two cyclists from Burkina Faso, a West African nation: Lassane Gasbeogo and Kadidiam Nikiema (photo). The pair came to England with the mission to represent a whole nation, and they were vey proud of it.

However, it all went downhill after their government failed to pay for training facilities.

After less than a month in London, they had nowhere to go, and ended up – together with other three people from the delegation – ‘camping’ on the floor of Heathrow airport. The dream had become a nightmare.

But luckily enough, as police questioned them, someone stepped forward to rescue their paralympic dream. Liam Conlon, a 24-year-old from Essex, volunteered to take the Burkina Faso team home with him.

“That was the only thing I could think of,” Liam told The Guardian. “Never occurred to me to do anything other than help them out.”

And he did everything he could by going out of his way to try and help them rebuild a nation’s dream. Liam even got to persuade a local school in Brentwood to let the athletes use their facilities for training.

The two cyclists quickly became the talk of the town.

“They basically cause a storm wherever they go, but they are absolutely loving it”, he said. “In Burkina Farso you have people with absolutely nothing, yet they are willing to give you everything they have got.”

Liam’s gesture inspired other people to take part and act to help the team. As it emerged that one of the bikes did not meet Paralympic specifications, a local supplier stepped in to provide a replacement at cost price, meeting the outstanding balance for shipping out of his own pocket.

“You get emotionally involved in finding solutions to people’s disabilities so its an extension of that, and to just be part of the Paralympics in some way is fantastic,” said local businessman Rob Henshaw.

At the end, the athletes went back home without winning a single medal for Burkina Farso. However, they got more than that with the support and kindness of a whole town, which have certainly played a big role in helping them achieve their mission to honour their 18 million compatriots. They did it, but it would not be possible without Liam, to whom they will be always grateful.

“It has been a fabulous experience, that we didn’t expect at all. Without this help, we just wouldn’t be here“, said Burkina Faso’s Chef the Mission Florentine Ouedraogo to the journalists before their last race. “If any of these people come to Burkina Faso, they will be welcomed as though they were our family.

And Liam would not hesitate to do it all over again: “It really changed how I thought about things, so helping them didn’t in any way feel like a hardship. This is the way people should behave, it was the right thing to do.”