The Cameron Effect: When tragedy becomes ‘7 Acts of Kindness’

Since 2001, 11 September is remembered as a day of destruction due to a series of terrorist attacks that killed thousands of innocent people. Even though the pain is unlikely to ever go away for completely, one family – in Lincoln, US State of Nebraska – is trying to use this tragic day to start something positive, which they call ‘The Cameron Effect.’ 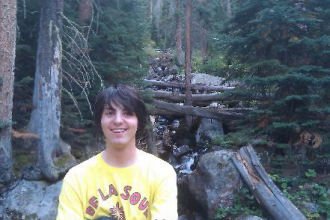 Cameron Freeman was 22 years old when a drunk driver killed him, in November 2010. With the aim of transforming the grief into hope, family members are asking everyone to commit seven random acts of compassion between 11 September and 7 December –Pearl Harbor Day and also Cameron’s birthday.

Shelley Freeman, Cameron’s mother, explains the idea started in response to the anger and vengeance expressed about the crash:

“Instead of the negativity, we ask people to do what we think Cameron would have preferred – 7 acts of compassion.  They can be simple, even thoughts of forgiveness count.  And for a real challenge, try being compassionate towards someone you dislike.  Try forgiveness, too.  Then think about how doing each deed makes YOU feel.”

People can register their good deeds on cards as a sign of kindness, compassion and understanding. In December, the cards will be collected and made into Kindness Quilts.

“It doesn’t have to be anything big that involves money,” said Shelley in interview to a local paper. “It does have to involve the heart. We want people to do it out of passion, documenting what they did and how it changed them.”

Detective Jay Armbrister, who investigated the crash, were touched by the initiative.

“We see tragic wrecks and situations, but this one had more of a deeper feeling and it kept me a little closer because I could have pictures myself in either of these young men’s situations, so it just made me think is there something I could do to get this message out.”

His first of the seven acts of kindness was a presentation to college students about making good decisions when drinking.

“My thought was this could be one of my first acts of kindness, is trying to put this thing together. There’s always something that comes from tragedies, but I’ve never seen anything with a pair of legs like this.”

For Cameron’s mother, the most important is to make people aware of the dangers of drunk driving. She admits Cameron himself, like many people, was also capable of getting behind the wheel after drinking. Thus, anyone has the potential to kill.

For more information on the Cameron Effect, click here

No matter where you are, there are always a way to take part. Here’s two simple tips that suit everyone willing to join in the kindness movement: